Am back on the east coast.  I feel like I have finally accepted the fact that other cities exist aside from NY.  I know, I can be pretty dense sometimes. 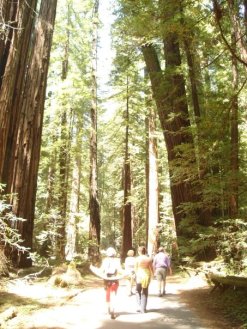 Did you know that there is no humidity in San Francisco?  I’ve finally found a climate that matches my temperament.  And if you include the potential earthquakes, well then one could make a very poignant and compelling argument in favor of this hypothesis.

I also bought a bunch of cds this week.  Have geekily been listening to She & Him a bunch.   It’s geeky because it is longingly sentimental and the lyrics aren’t the most sophisticated, but they do this great cover of the Smokey Robinson tune “You Really Got a Hold On Me” and The Beatles “I Should Have Known Better.”

Watch/Listen (don’t worry, it’s short and the most inoffensive audio I could find):

I also bought Santogold (who is strangely opening for Cold Play this time around), Wolf Parade, Pink Floyd’s Meddle, and the Nina Nastasia and Jim White album “You Follow Me”.  Kind of gluttonous but I was on vacation.  That’s my rationale anyway.